Sunday, April 27 is World Pinhole Photography Day. And, here in northern New Mexico, we are fortunate to have the world’s largest collection of pinhole photography and its associated paraphernalia.

In honor of the annual event the New Mexico History Museum is hosting Poetics of Light, an exhibition of the collection’s images from pinhole enthusiasts around the world.  Poetics of Light will open on the celebratory Day itself and run for about eleven months. (http://www.nmhistorymuseum.org/pinhole/)

The collection of 6000 photographs, 200 cameras and 200 books is the result of the generosity of Eric Renner and Nancy Spencer, Co-Directors of Pinhole Resource.  Both artists’ pinhole and zone plate photographs can be viewed on their sites at:

There are many web sites providing directions for making your own pinhole camera.  Or, you can buy a camera for as little as $10 or as much as several hundred.  Check out both directions and ready-mades on the internet.

Herewith, a couple of samples (courtesy of the New Mexico History Museum) to whet your appetite for pinhole photography – and remember to get out there and create your own images this Sunday! 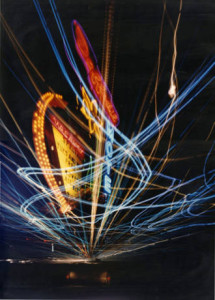 How can the public stay ahead of Big Brother when there are so many ways to keep tabs on citizenry? In what has to rank as one of the most creative methods, the City of London has been able to track Wi-Fi enabled devices that pass within proximity of 12 of the 100 “bomb-proof” recycle bins installed just before the 2012 Olympics. One might have guessed these bins were capable of more sophisticated uses as they sport internet-enabled displays. The 12 sleuth bins were “developed by… “Presence Aware” which markets the technology as providing ‘a cookie for the real world.’” Once again commerce and the security state intersect.

The only UV camera in space was de-commissioned at the end of June so its funding could be used for other NASA departments. While the ending of this mission was scheduled, it is highly disappointing that a still functioning observatory that provided much deep-space data has had its plug pulled. All the more shameful considering the many wasteful federal programs that ought to be axed instead.

Unlike visible light telescopes GALEX (Galaxy Evolution Explorer) scanned our universe in the ultraviolet spectrum viewing both the birth and death of stars thereby telling us much about their creation.

NASA has a site showing some of the amazing images captured by GALAX.

The above image is Cygnus Loop nebula, the debris from a star that died thousands of years ago. The image is ultraviolet light emitted from the expanding tendrils of hot gas that was the star. 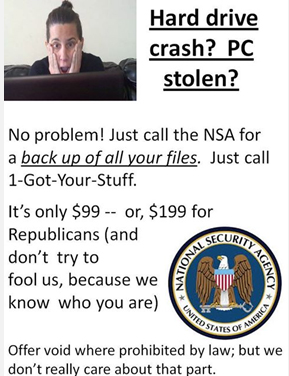 Snowden shaken, but has not stirred.

I read somewhere last week that Edward Snowden, the flighty ex-NSA contractor, asked visitors to his Hong Kong apartment to put their mobile phones in his refrigerator. He was attempting to block the GPS signature of their devices in case they were being monitored to determine his whereabouts. What he was trying to do, in effect, was use his fridge as a Faraday cage*.

As is my nature, I was skeptical whether this would actually work. A fridge, it seemed to me, could just as easily be an enhancer of cell signals – a giant antenna what with all that metal and significant gaps for the rubber gaskets. So, being of a scientific bent of mind I tried an experiment. I placed my Samsung mobile in a large Samsung metal-clad refrigerator and dialed it. Voila! The in-coming ring could heard, connecting quicker than it normally does! So much for the rocket-science of a former NSA guy. (Could there be communication channels between all Samsung products? I’ll test another fridge when I get a chance.)

Not content to stop there I then put my mobile in the microwave. This common household appliance is manufactured with one of its express purposes being the blocking of … yes, yes, you’re getting warmer: microwaves! Try as I might, I could not receive a cell signal in this most useful of modern fixtures.

As an addenda, if you are the James Bond type, I have heard that an all-steel martini shaker works to block signals, too. My phone is too large to fit in the shaker at hand to test this hypothesis. And besides, it’s filled with mojitos!

* A Faraday cage, or shield, is named for the English scientist Michael Faraday (1791 -1867). It is a solid or mesh enclosure that blocks most external electro-magnetic fields. Mesh will work as long as its openings are smaller than the radiating wavelength.