Often, when we read ‘hyperbole’ about a person, place or thing, we turn to it only to find that the hype is just that: hype. There are those few times, however, when all the fuss turns out to be revelatory and transformational. Such is the case with the 2007 discovery, in a storage contents sale, of the photography of American-born Vivian Maier (February 1, 1926 – April 21, 2009).

Discovery is not too strong a word as her work was unknown to even the families for whom she worked as a nanny.  She never displayed, much less exhibited, the “collection of 100,000 to 150,000 negatives, more than 3,000 prints, hundreds of rolls of film, home movies, audio tape interviews…” that have come to light. (See http://www.vivianmaier.com and the 2013 film, Finding Vivian Maier.) The bulk of the photos seem to be riveting street images and they are hard to  pass by. Viewing them is a lot like eating ice cream: a spoonful makes you crave more… lots more.

According to the children she cared for she  carried her camera wherever she went. This is easy to believe from the many great images of the world around her. (She must have been very good at what we now label “multi-tasking”; watching the children in her care and snapping fleeting moments is quite a skill.) Fortunately for the world of art we are seeing her work at last. Its clarity, honesty and personal vision has caught the imagination of those in a position to let the rest of us see more. In the few short years since the discovery of her black & white negatives there have been numerous exhibitions at galleries and museums around the world.

Vivian Maier’s hidden obsession with making pictures ought not be confused with that of the normal hobbyist. She was exacting in her idea of what her finished products should look like, much as any artist. She would often send her negatives out to a developer, even though she had set up a dark room in her bathroom, and would ask for an image to be reprinted if it did not meet the critical demands of her eye.  Also, as the photos below make clear, she, like the best street shooters, traveled to neighborhoods many Americans of the 1950s and 1960s would never have visited except during their sit-down breakfast or dinner with the daily paper. 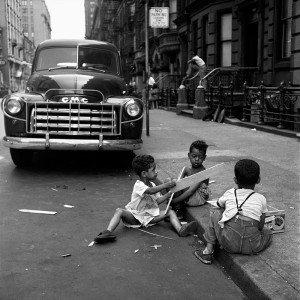 But, she clearly planned her exposure possibilities, too. The web site has a couple of her ‘sidewalk’ photos of celebrities: Kirk Douglas at the premiere of the movie Spartacus, Chicago, 13 October 1960 (Catalog VM1960W02526-07-MC), Frank Sinatra, Emmet Kelly, etc.

Born in New York, Maier was raised in France before returning to the United States (and then going back to France and, finally, returning to the U.S. in 1949 to live for the rest of her life.) Altho she is described as super secretive and closeted, she managed to take many vacations around the world. There are stirring images from India, Egypt, France, Yemen, Thailand and other locations. The photo below, from Saigon, is somewhat uncharacteristic in that her subject is smiling.

Let’s all shout out a grand Thank You to John Maloof in Chicago for buying that $380 carton of negatives in 2007 — and then spending about $70,000 to track down and buy cartons from others who had purchased her work at that original sale!