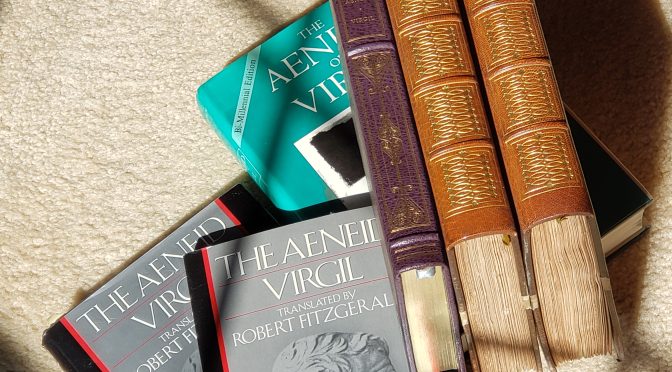 The Aeneid is the story of how a refugee from beaten and destroyed ancient Troy preserved his people, via divine authority, by founding Rome, with his descendants going on to establish an empire.

In 19BC the Roman poet Publius Vergilius Maro left Greece, where he had been conducting research for The Aeneid, to return to his home in Rome. He shipped out on a vessel with the Emperor Augustus, as one does. They stopped at Megara where Virgil contracted fever (or heatstroke) and he died as the ship docked in the southern Italian trading port of Brundisium. Among his last thoughts was his dissatisfaction with a 10-year long writing project, this book, The Aeneid. Rather than let an unfinished work see the light of day, he asked his executors to burn the manuscript. Augustus, who knew something of the book as Virgil had read him three chapters, stepped in and ordered the work to be published ‘as is’.

The Aeneidis an acknowledged cornerstone of Western literature and by two centuries after his death was a prerequisite in Latin education, which is to say, any western education above the rudimentary. Even in the 19th century it was often a requirement of students to memorize the whole of it! Its 9,896 lines have been printed in hundreds of editions in both its original Latin dactylic hexameter and in poetic and prose translation. Its opening line was even found in excavation as graffiti in Pompeii: Arma virumque cano, “Of arms and a man I sing.”

In 1680 Henry Purcell published the music for one of my favorite operas, Dido and Aeneas with Nahum Tate writing the libretto. (Tate is today mostly remembered, when he is remembered art all, for rewriting Shakespeare’s plays so that every scene would be “full of respect to Majesty and the dignity of courts”. Yes, the more things change, the more they stay the same!) I have many versions of The Aeneid shelved in several libraries around the house. My current favorite is the translation by Robert Fitzgerald (1983). I own four copies of this translation: one (trade paperback) in the sunroom library, one (mass market paper) in the research area for my work on wine in life and literature and two in the bedroom (first edition hardcover and a trade paper to share my enthusiasm by lending to friends.) Hmmm…. maybe this is why I have more than 5,000 books!

Virgil was a talented writer and superb stylist who cleverly knew his way around alliteration, onomatopoeia and other wordplay. His poetic lines are of a grand and stately solemn nature, very foreign to our modern ears attuned as we are to formulations of unstructured free-style verse and sentences. His goal in The Aeneid was to create a work that would glorify Rome and rival Homer’s Odyssey and Iliad. There are twelve books (what we might call chapters) in The Aeneid, written using the same syllabic and metrical line as used by Homer. The first six chapters play on the Odyssey and the last six the war and battles in the Iliad.

Though a great work, The Aeneid has not been free of issues. Yes, there are literary ones (it is a bear to translate as it is composed in what the Germans call kunstsprache, an artificial or invented artful language; I never truly mastered it in my school Latin.)

But, the problems I address here are political in nature. The work was ‘co-opted’ right from the beginning by Augustus. The emperor is kindly mentioned by name in scenes where Aeneas is gifted sight into the future when he enters the Underworld to visit his late father, Anchises. Augustus’ reign came after decades of instability (the Roman Civil Wars) following Julius Caesar’s crossing the Rubicon in 49BC, taking his legions into Rome and eventually becoming Dictator. Augustus was seen by many as savior and last hope of the Roman people for peace after the civil turmoil. Likewise it has been used through the centuries as a support for the aggrandizing and subjugating nature of colonization, a classical ‘white man’s burden’ made flesh.

But, to be fair, The Aeneid has also been interpreted as an anti-war poem and it is this tack I take. The language and potent imagery is second to none – cinematic even. The battle scenes do not require a very active imagination to visualize. It is sad that Virgil is no longer on the required reading list of our schools. It still has a lot to teach us about myriad human qualities like devotion, piety, hubris, rage, fate, courage and love in all its incarnations. Stop in and borrow a copy or buy your own if you are unfamiliar with the joy of reading this fine story.

Below, a section from “The World Below”, where Aeneas, led by the Sibyl, travels to the Underworld to see his father. She is carrying, under her dress, their entry ticket: the golden bough. It had been torn off a tree by Aeneas who was foretold it was needed as a presentation to Charon to get him to ferry them across Cocytus, the Stygian river leading to Hades. At the other side of the river there is another obstacle, the huge three-headed dog, Cerberus, but he enters the picture some lines later.

(If the words ‘golden bough’ seem familiar look up J.M.W. Turner’s painting of the same name and, also, the early anthropologist Sir James George Frazier whose work greatly influenced a generation, including Freud and Jung; Aleister Crowley; T.S. Elliot and William Carlos Williams; Hemingway, James Joyce, D.H. Lawrence, Robert Graves and Yeats; and the man who founded anthropology ‘off the verandah’, the founder of my university’s department, Bronislaw Malinowski, who was prompted to lay out the first statement of the aims of ethnography in his ground-breaking Argonauts of the Western Pacific (1922). Though now superseded in scholarship, for many years The Golden Bough exerted a profound influence upon literature, anthropology and intellectual thinking.)

The cavern was profound, wide-mouthed and huge,

Could never safely take their way, such deathly

Exhalations rose from the black gorge

Into the dome of heaven. …

The Sibyl cried, “All those unblest, away!”

Depart from the grove! But you, Aeneas,

Enter the path here, and unsheathe your sword.

She flung herself wildly into the cave mouth,

Leading, and he strode boldly at her heels.

Gods who rule the ghosts; all silent shades;

And Chaos and infernal Fiery Stream,

And regions of wide night without a sound,

May it be right to tell of what I have heard,

May it be right, and fitting, by your will,

That I describe the deep world sunk in darkness

Now dim to one another

In desolate night they walked on through the gloom,

Through Dis’s homes all void, and empty realms,

As one goes through a wood by a faint moon’s

And black night blots the colors of the world.

Before the entrance, in the jaws of Orcus,

Grief and avenging Cares have made their beds,

And pale diseases and sad Age are there,

And Dread, and Hunger that sways men to crime,

And sordid Want – in shapes to affright the eyes –

And Death and Toil and Death’s own brother, Sleep,

And the mind’s evil joys; on the door sill

Of the Eumenides, and raving Discord,

In the courtyard a shadowy elm

False dreams, the old tale goes, beneath each leaf

Cling and are numberless. There, too,

About the doorway forms of monsters crowd –

Briareus, and the Lernaean hydra

Hissing horribly, and the Chimaera

Against them as they came. If his companion,

Knowing the truth, had not admonished him

How faint these lives were – empty images

Hovering bodies – he had attacked

And cut his way through phantoms, empty air.