Although India ought to be on the list of world cultures that one visits in a lifetime of travel, it is probably not for all travelers. Well, let me modify that with a caveat. If one includes the category of luxury travel where one essentially floats through an environment in an air-conditioned, antiseptic bubble with your personal Jeeves at the beck and call… if that is your cup of Darjeeling them yes, Incredible India may be for you, too.

One of the Must-Do’s not on my India Bucket List, however, was the Karni Mata Temple in Deshnoke, Rajasthan. It draws Indian pilgrims from far and wide with a smattering of tourists thrown in (I saw one, presumably non-Indian, European while I visited.) But there are about 25,000 kabbas resident here (give or take; I saw a dead one on my exploration.)

“Legend has it that Laxman, Karni Mata’s stepson (or the son of one of her storytellers), drowned in a pond… while he was attempting to drink from it. Karni Mata implored Yama, the god of death, to revive him. First refusing, Yama eventually relented, permitting Laxman and all of Karni Mata’s male children to be reincarnated as rats.”

Yes, you read that correctly; a kabba is a rat. Specifically, it is a member of the species Rattus rattus, the lovable black rat, every child’s idea of the perfect pet and not to be confused with its more malleable cousin, Rattus norvegicus, the brown, better known as the Norway, or Sewer, rat. Everyone on the planet knows this latter beastie because it is the staple of research laboratories, pet stores and is, alas, the most successful and common mammal on the planet – with the notable exception of humans. Only Antarctica has been spared (for now).

While I was looking up at the acre of wire mesh that covers the mostly open-air compound and thinking of Yersinia pestis, the bubonic plague, a kabba, scurrying to a destination unknown to me, ran over my right foot. This is considered especially lucky, bestowing only good things upon one so blessed. To my credit I did not scream.

I think the overhead wire mesh is to keep out the large numbers of Columbidae livia, rock doves, whose planetary feral populations have exploded. (I will go out on a limb right now and hazard that they are number three on the list of earth’s most cosmopolitan mammals.) You and I, and everyone else we know, simply call this bird a pigeon. It is a certainty that these rats-on-wings would dive in and settle down to eat the ample food stores spread around for the kabbas, for India, as elsewhere, is profoundly inundated with pigeons. The wire screen roof also keeps out India’s many birds of prey. It would be bad form to let any of the temple’s 25,000 holy inhabitants end up as meals-that-squeals.

Naturally, there is a distinct odor to the complex, one that might charitably be called barnyardy. I suppose it is a combination of the mammal residents, the food spread around by visitors and the excrement left after the food is eaten. As if to get even for their exclusion, there is also an unfair amount of pigeon poop because the wire screening cannot, of course, keep it from dropping in to pay its respects to the unfairly favored King Rat.

As with all India’s sacred spaces, shoes are verboten! 99% of pilgrims leave theirs helter-skelter in the street-cum-public-square in front of the temple, tho there is an official concession for footwear storage just a few meters beyond. The attendants looked lonely so I used it. (No, that’s a lie: they were not lonely; so many people had looked Keenly at my sandals I was worried about some less-than-honest pilgrim waddling off in them so checked my sandals properly.) The shoe storage sits at one end of the row of kitschy concessions lining two sides of the square. All sell sweets, snacks and every tacky knick-knack known to rat-dom (don’t groan, I could have written ‘ratty’ instead of ‘tacky’.) The atmosphere would not be out of place as the Midway of a 1960s circus with touts trying to snare passers-by one and all. I, in thoughtful foresight, wore a pair of those little hospital socks with grippy pads on the soles as an ensemble with my sandals. Lord (Krishna) knows if I would have had the fortitude to cross the street and enter the temple with feet unclad by sox once I checked my Keens into official care.

On a highbrow note, there is excellent architecture to indulge in and a set of solid silver doors, even if the bulk of the temple is painted Pepto-Bismol pink. My one complaint is that the large marble lions outside really ought to have been over-sized King Rats. Attendees may cast this as a matter of little consequence; the lions are rarely visible because of the hordes of Indians who lounge over them executing self-portraits. The European visitor and myself were the only ones I saw actually taking pictures of the temple; everyone else simply used the temple and its parts as their selfie back-drop, as is the case at every other site in India. At least Karni Mata is on flat, solid ground. The railings at the battlements of forts and palaces have oftentimes been installed after someone forgets they are hundreds of meters in the air and leans back for a better facial photo extension. I am not making this up. 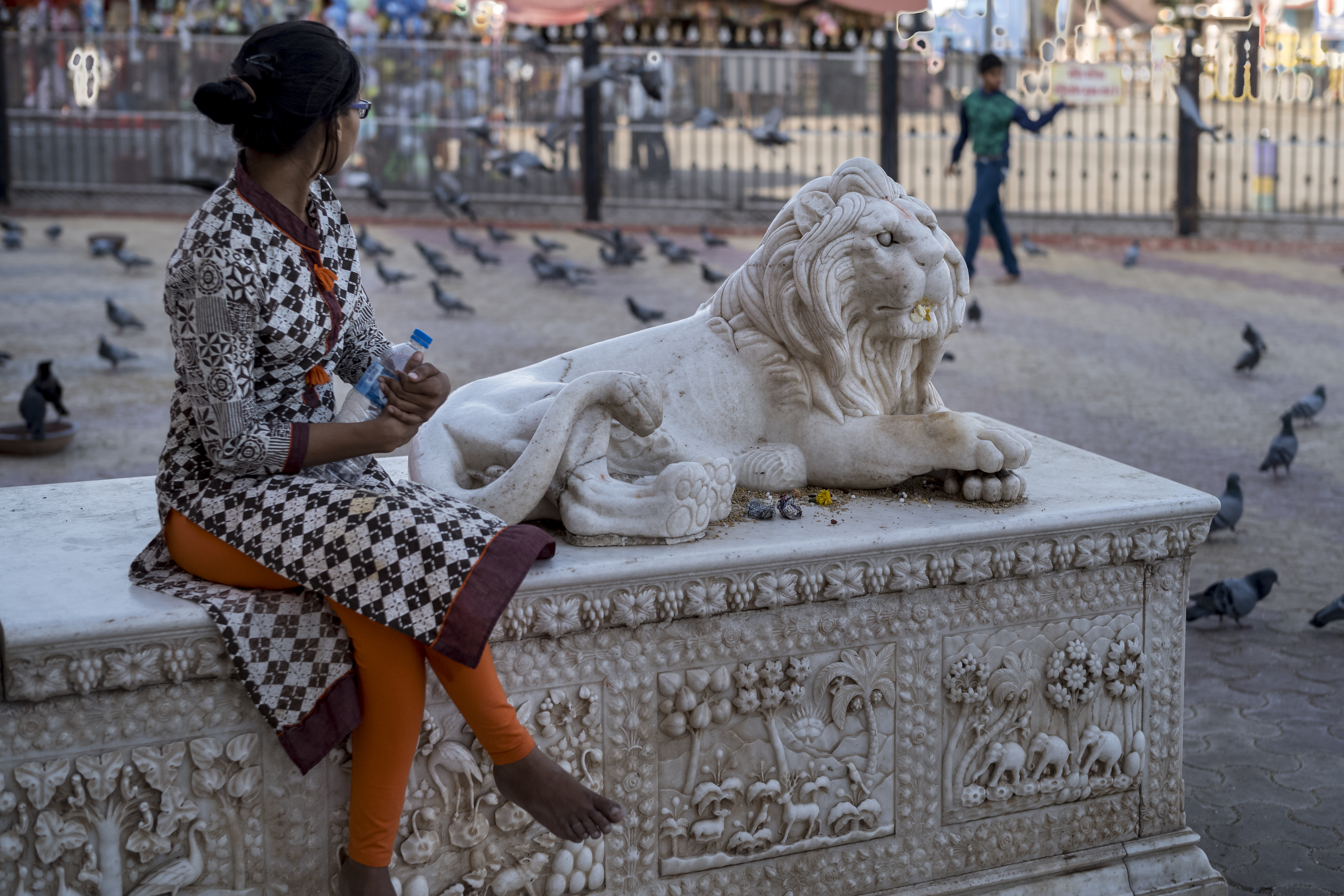 For you early birds Karna Mata opens at 4:00 am. It is dark then so for the squeamish maybe that would be the best time to go. As there is so much food about, and rats are easily distracted, there is ample tucker for one and all, including you, dear visitor. It is said that eating food nibbled on by the rats is a high honor. If you will, please let me know how that works out. Also let me know if you see one of the rare white rats. You guessed it: that is also an auspicious honor. In this particular quest I failed. I thought to dash out and cross the square to find a flute (probably available as one is always shown with Krishna in a playing posture) and I’m sure a pied suit could have been procured, as well. Then I came to my senses and ended this line of reverie. Who wants to end up as a fatality statistic after luring all the rats out of Karni Mata just to sight a white one?

Some of you reading this may take my tone amiss, as a bit of unenlightened, agnostic snark. Please do not interpret my remarks this way: for those who travel, if you do not go to India you will have missed a precious and wonderful chapter of the human novel!

Well, that about sums up this installment except to write that while there are many monkey temples in India, Karna Mata is unique, as far as I know. And I am satisfied to report: Been there! Done that!

(with apologies to Miss Freeman, my 8th grade English teacher, from whom I learned the proper setup of an octave and a sestet for the Petrarchan, Spenserian and Shakespearean sonnet forms. First know the artistic rules and then feel free to break them.)

East meets West – We’ve all the Best
Paintings with Class; our Jewelry – a Blast
Music and Dance; Textiles that Prance
Stone sculptures of Schist; Ah… feelings of bliss.

But, as in any form of living thing, mi’ lad
Good lives not unalloyed with the bad.
Meditate on this,
Hurriedly or at Ease:

Enter India if you Please
At some small personal Risk.